During May Amber Valley, in conjunction with Derby, ran a mild trail. The Amber Valley winner was Angels Bar, Belper and the runner up was the Red Lion, Ripley. In Derby the winner was the Smithfield with the Flowerpot as runner up.

The award winners below were presented with their certificates during March see our Awards page for pictures.

Our Branch is allocated 12 entries and it's always a tough job choosing entrants from the wide array of fantastic pubs we have in Amber Valley - Congratulations to all our entrants!!

South Derbyshire Pub of the Year

The accolades keep on coming for our very own Amber Valley Pub of the year, with it also picking up the South Derbyshire Pub of the year title 2018.
Below, Gareth Stead, Area organiser did the honours, with the White Hart Bargate going through to the East Midlands Round (Which includes the 5 area winners), with judging closing today 5th August.

The next stage, if successful is where the 16 regional finalists, will be whittled down to 4 nationally'

Not only were Lincoln Green Brewery kind enough to sponsor our glasses this year, they also offered to brew a festival “special” and invited some of our branch members to get involved in a brew day at their brewery in Hucknall.  Brewery owner, Anthony Hughes, discovered a recipe for a brown stout dating from 1820, in keeping with our festival theme of the bicentenary of the Pentrich Revolution.  Not only did he find this unique recipe for a heritage brew, he also managed to borrow a number of oak casks from one of the country’s four remaining coopers to brew it in.

Under the watchful and expert eye of head brewer Martin, four Amber Valley CAMRA members helped to carefully measure out the ingredients used and to add them at the appropriate points in the process.  The traditional English brew consists of three malts, including a dark malt specially obtained for this brew, Fuggles hops, a traditional English variety, and a strain of Nottingham Ale Yeast. Cleanliness being a vital part of brewing, we also helped with the cleaning up.  Shovelling the spent grain out of the mash tun was a little messy, particularly for “volunteer” Sean who had to climb inside to wash out the remains with a hosepipe!

We left our brew to ferment in its casks and advised by Anthony a week later that it had resulted in a very assertively flavoured brown stout with highly intense malt flavours of treacle, molasses and chicory likely to be around 6.2% ABV.  Whilst this Revolutionist’s Brown Stout (by now named “Owd Tom”) would be a very tasty ale in its original format, and certainly interesting as a one-off festival special, Lincoln Green decided to experiment further by blending it with two of their existing beers, Tuck and Hood.  This has produced two more unique Revolutionist’s Brown Stouts of lower strength (5.3%-5.5%) and limited amounts of these will also be available at the Festival.  They have been named “Brandreth, Ludlam and Turner” (Tuck Blend) and “Hangman’s Noose” (Hood Blend). 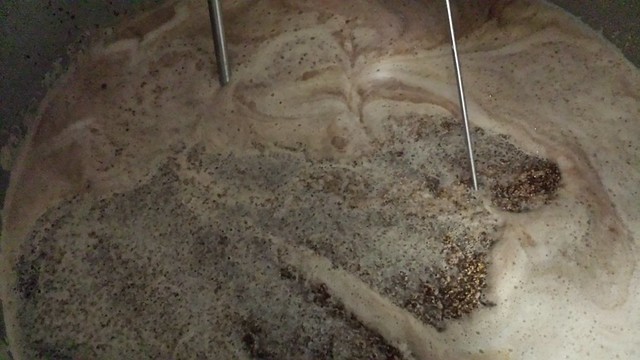 The voting and judging is now complete and we our Winners.
Click the link below to find out who this years winners were.

Pub of the Year 2018 - Nominations are now open

If you are an Amber Valley CAMRA member you should have received an email from us this week asking for your nominations for the 2018 Pub of the Year competition.  If not, it means we don't have your email address and you are missing out on all notifications from the Branch.  Should you wish to be included, please send your name, membership number and email address to poty@ambervalley.camra.org.uk.  We will send you details of the Pub of the Year competition and then forward your email address on to our Membership Secretary to update your records.

The nomination phase of our Cider Pub of the Year Competition 2018 is now complete and the shortlist of 6 pubs (in alphabetical order) to be judged is :-

We now enter the judging phase which will last from Wednesday 1st November through to Thursday 30th November. Should you wish to judge these pubs it is not too late. Judges need to be CAMRA members but not necessarily members of Amber Valley Branch. Judges need to visit each of the above pubs at least once during the judging period. If you are interested please email me at chairman@ambervalley.camra.org.uk.

A form detailing the various categories to be judged, together with explanatory notes from CAMRA, will be sent to any member who volunteers to take part in the judging.

The Spotted Cow in Holbrook now has 225 new owners after a community group collected the keys for its local village pub.

Campaigners of the Holbrook Community Society had been fighting to buy their beloved village pub since it closed its doors in 2014. But last year, its owner applied for planning permission to build houses on the site. In November 2016, Amber Valley Borough Council surprised many observers by turning down developer Ian McNair's plans to demolish part of the pub and build eight houses on the land. Mr McNair was not planning to retain the remaining part of the pub as licensed premises.  The pub was declared an Asset of Community Value - giving villagers time to put in a bid to buy the premises themselves.

Since then the campaign to save the Spotted Cow has gained serious momentum - with a final tally of 225 investors - joining forces to buy pub itself and the lower car park for £275,000

Change of Day For Monthly Socials

As explained in recent monthly Social Survey reports, we have had difficulty booking transport for the beer survey trips on Saturday nights so have changed the nights to Friday for 2017.  The provisional dates for the year are being finalised but the first one will be on Friday 3rd February 2017.  Look out for the full schedule on the Socials & Survey Trips page at the beginning of January.

Pub and Club of The Year

We are pleased to announce that our Pub of the Year for 2017 is the White Hart, Bargate

Runner Up is  the Holly Bush at Makeney.

In support of the the site occupied by the pub not being sold for development, the view below has been submitted to the Amber Valley Council Planning Department.

Proposal to De-Licence the Spotted Cow Public House, Holbrook.
We have followed developments regarding the Spotted Cow with growing concern. For those of us with long memories back in the 1970’s the Spotted Cow was a thriving community pub. It has been a pub ever since then, with an emphasis on food, well supported principally by members of the local community. The proposed de-licencing of the Spotted Cow would represent a serious loss of amenity for that community, an action group, the Holbrook Community Society (HCS) has been formed and the pub is now protected by ACV registration. We accept that in the long term a pub cannot remain open if it is not financially viable. We emphatically do not accept that this is the case with the Spotted Cow. A very well supported local campaign has raised the necessary funds to buy the pub and run it as a Community Hub. It would have added amenity as a post office, as well as some accommodation. We do not accept that the owner of a pub should be allowed to de-licence it just because the land could be profitably sold for development. The argument that there are other pubs in Holbrook, and therefore that there is no need to retain the Spotted Cow is weak. Holbrook is a long, spread out village; there will be more than enough trade at that end of the village.

Rejecting the application for change of use would pave the way for the pub to be bought by the local community with very considerable benefits for the village of Holbrook. Just look at the George &amp; Dragon at Hudswell, North Yorkshire. This pub was threatened with closure, bought by the local community and is now CAMRA’s National Pub of the Year. We urge you to reject the application to de-licence the Spotted Cow.

The Good Beer Guide 2018 selection meeting will be held in February at a venue to be confirmed shortly.  The final date for inputting beer scores which will contribute to the selection process on the night is 31st January so please make sure that you add any outstanding scores via whatpub.com beforehand and as many as you can during January.

East Midlands Pub of the Year

Following on from their recent award of Derbyshire South Pub Of The Year, we are delighted to announce that our Pub of the Year, the Old Oak at Horsley Woodhouse, has now won East Midlands Pub Of The Year.  They now progress to the next round of judging, competing for one of the four super-regional crowns.  Congratulations to Tracey and her team for winning another award and being the first Amber Valley pub to get past the County and Regional judging stages. We wish them the best of luck in the next round.

Beer Scoring & The Good Beer Guide Selection Meeting
We held our Good Beer Guide 2017 selection meeting in February 2016.  It’s always difficult to choose ten entries in an area where we are fortunate to have so many pubs selling an excellent selection of real ales and ciders.  The basis for discussion at the meeting is always the statistics taken from the beer scores input by CAMRA members via What Pub throughout the year.  This year we had over 3,500 scores for 95 different pubs and we would like to thank everyone who took the time to enter scores.  Any scores input from 1st February will now contribute towards next year’s selection process.  This year’s entries will be revealed when the next edition of the Good Beer Guide is published in September.

Sad News From The Holly Bush

The branch is very sad to hear the news that John Bilbie, long-time owner of the Holly Bush at Makeney, has passed away at the age of 84.    Here's a link below to the Derby Telegraph article where Chris Wilbraham (current licensee) fondly details John's history with the pub:

In 2013 the branch awarded John a long service award for his long-standing ownership of the pub and his support of real ale over the years.  He is pictured below (left) along with Branch Chairman Chris Rogers.